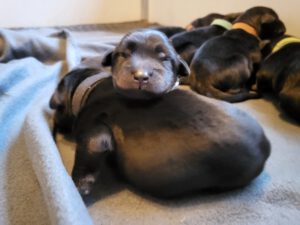 Q litter week 1 has started at April 20th. The puppies were born in the late evening and night. The birth went extremely quick. The first signs were there at 18.15 hours. The first puppy, a black and gold boy, said hello at 18.45 hours. At 20.55 puppy nr. 7, also a black and gold dog, was born. In total Krek had 7 puppies in 2 hours. Krek was a bit overwhelmed. But after a while she got relaxe and fell asleep. This was a great chance for the puppies to have a go at the milkbar after two hours of waiting. 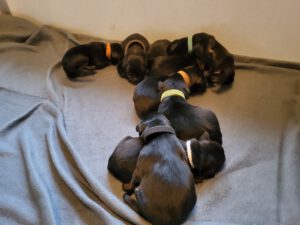 And then, suddenly at 0.00 hours puppy nr. 8 was born. Half an hour later, nr. 9, also a black and gold dog, was born.  So we had 9 puppies in total, 5 boys and 4 girls. Krek has now empathised with her role as a mother. She takes good care of the puppies and feeds them well.

As you have probably seen, we know the names of the puppies. The name Quick Bartl has a very special reason. Unfortunately we got the terrible news that daddy Bartl had a car accident at Eastern and he didn't make it. So we thought it would be great if one of the dogs will have his name to honour him.