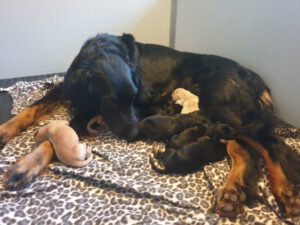 From January 2nd on, we have started to take Nana's temperature because we wanted to have an idea when the birth would begin. It helped us good. 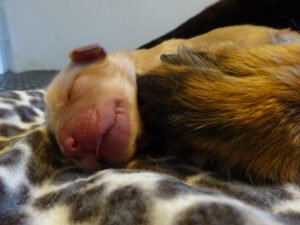 January 6th in the evening Nana became restless and didn't really want to eat. Those are good signs for an expected birth. At the end of the evening she made a start. At 11 the first pup was born, a beautifull black and gold boy. Within a few seconds he found the nippel and started to tank. Within half an hour nr. 2, 3 and 4 were also there, two black and golds and one blond.

After an hour of rest, nr. 5 came, a black and gold boy. Half an hour later followed by a blond bitch and half an hour later again a bitch. This time it was a black and gold. And then there was some delay. Number 8 didn't really want to get out. Nana was getting tired and the puppy didn't do a lot himself. But then finally after 1,5 hour she was there. Nana relaxed and fell asleep, while the puppies were enjoying the milkbar.

Time had come for me to take a nap. After two hours of restless sleep i went to have a look at the newborns and their mummy.

SURPRISE!!! There were two puppies more, so ten in total.

I'm really very happy! Nana and her puppies are okay.

Look here for the Video of the puppies