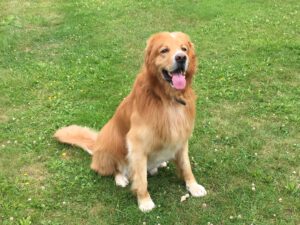 On Monday, February 15, 2021, we had to put our wonderfully sweet dog Othello to sleep. Othello was born on October 4, 2007 together with 2 brothers and 6 sisters. Officially Othello was born as Uzos van de Romerweide. In the Netherlands, October 4 is animal day. Othello was not only a special dog but was also born on a special day. From the first time we met Othello, we were immediately in love. My daughter Océane sat down on the floor with the puppies and Othello came running right up to her and then lay down on her lap. It was love at first sight.

Immediately after the puppy course we emigrated to Ivory Coast, to return after a few years. Othello also did a great job in Africa. When we played Frisbee, people would come to the edge of the field to watch. Othello could jump so high and hang in the air for so long that he would float horizontally in the air and grab the frisbee out of the air.

We will especially remember Othello as a true family friend. He was tremendously sweet to the family, very stable, adventurous and watchful. We enjoyed each other immensely! He was also a handsome dog and therefore received many hugs from children who wanted to pet him.

We can recommend the breeder Van de Romerweide with confidence. They helped us very well and were available at all times. Othello has had no special diseases and grew up healthy.

We will miss you Othello....

Dear Océane, Marcel, Mandy, Morgan and Madelyn, thank you very much for your care and love for Othello!